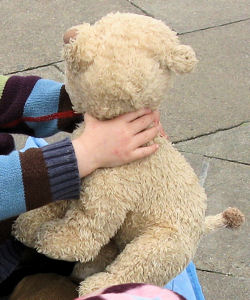 I would like to find a replacement for my son’s best friend ‘Good Kitty.’ His first words were actually ‘Good Kitty!’

She was bought in 2006 at Babies R Us and is a very light creamy yellow orange with pale stripes. Good Kitty is Finn’s best friend in the world, but I worry she won’t make it through many more washes or will get lost.

I have searched all over the internet but cannot find one anywhere. The horrible thing is I remember seeing a whole bin full of them on sale for $10 at BRU in early 2007, before he adopted her as ‘the one’, when he was around 9 months old. I wish I’d known then what I know now! He turned two in September, and good kitty has travelled everywhere with him, even to see his grandparents in Ireland and his auntie’s wedding in Italy.

He’s gotten even more attached lately. His pediatrician says it’s a stage they go through as they find their way in the world. Apparently she’s a comfort object for him that acts as his security blanket. Unfortunately she has also acted as his napkin and dragged on the ground a few too many times 🙂

If you can help Jenni find this Creamy Yellow Seated Cat with Pale Stripes, THIS SEARCH REQUEST IS NO LONGER ACTIVELY MANAGED. Please use Our FREE FACEBOOK GROUP, including POST CODE #121708-1 in the subject