Thanks Rosemary – Anastasia is awesome – the Clown was a match!!

Thanks again, your blog is amazing!

Anastasia has written that the clown was sold by American Greetings. The label indicated it was a Baby SOFTTOUCH, 1982 AMTOY, INC., just in case somebody else needs the info. 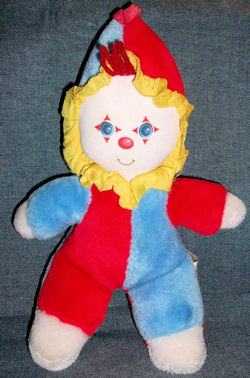 I was given this stuffed clown when I was very young. I named him Clownie, and he never left my side. I slept with clownie every night up until the night I lost him (in 7th grade!!).

He looks similar to this photo, except that he is half red, half blue, with a hat, yellow hair, and a painted face. He also had a string on top of the hat that I suppose was for hanging him as a decoration. But as a kid I would use that as my security sensor, as I constantly ran it between my fingers.

The face was soft/fabric, and the features were flat/painted on (just like the sample photo). I would say it was about a foot long with a terry-cloth-like material that the body was made out of. I am not sure what the filling was – it was definitely stuffed/plush, not beans, not hard…but on the firmer side. The limbs were different colors – like the photo, one red arm, one blue arm, one red leg, one blue leg, on opposing sides. the hat was red and blue and it had yellow ‘hair’ framing the face (almost like a lions mane) that was also fabric, not yarn.

I do not know where it came from, as it was a gift.

Clownie was given to me by my grandfather, who passed away in ’94. Clownie used to spend much of his time with his best friend (my older sister’s childhood toy, Ted Ted…who is now One-eyed Ted because he lost an eye). In 7th grade my family went on a family vacation to Disney World. Clownie got left in the bed, and was taken away by the cleaning lady.

I still remember that day (I am now 23) like it was yesterday, and have my journal entry from that day, and the days following. I would give anything to get a replacement clownie.

If you can help Bree find this 80’s Half Red Half Blue Face Clown, THIS SEARCH REQUEST IS NO LONGER ACTIVELY MANAGED. Please use Our FREE FACEBOOK GROUP, including POST CODE #122008-4 in the subject