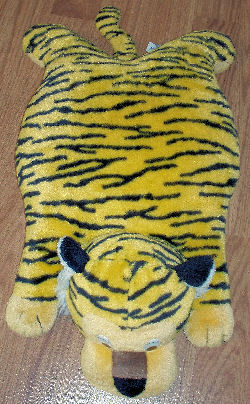 I’m looking for a KenTex Pillow Pal plush tiger that is wide and kind of flat and about the size of a bed pillow. I got this tiger in September of 2000 from a bx (Air Force store). The white fuzz that starts in his ears used to be a lot fluffier than it looks in the photo.

”Big Tiger” or sometimes just ”Tiger”, is not an IT to us. He is a HE. And he has been through a lot. I’ve had to sew his neck up at least twice and have added untold amounts of new stuffing. We refuse to part with him. I would love nothing more than to have a second one, so my oldest can again sleep with her buddy every night. She knows she can’t have the original back, because he’s acting as a buffer to keep little sister from falling out of bed. They share a room by the way.

It would do me a lot of good to know that both girls have a Tiger to protect their sleep.

Thank you for any help,

If you can help Jane find this KenTex Pillow Pal Wide Tiger, THIS SEARCH REQUEST IS NO LONGER ACTIVELY MANAGED. Please use Our FREE FACEBOOK GROUP, including the POST CODE #18251,