This is a photo of what Arfy looked like when he was new, before the repairs. 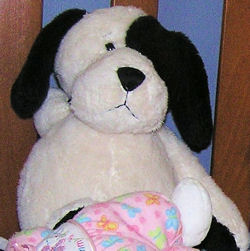 I am searching for a black and white stuffed dog in the Ganz Heritage Collection. I think it may have been discontinued in 2004 or 2005. It looks a little like Snoopy.

My daughter (now almost 5) named him Arfy as soon as she could talk at 18 months. Had I known when she was little that he would become “THE GUY,” I clearly would have bought at least 2 or 3 more of them. But, by the time I realized, it was too late. Couldn’t find him anywhere. Even called the company, but they didn’t make them anymore.

Raelyn takes Arfy everywhere. He helps her calm down when she is stressed or sick or injured. She calls him her Lovey. She has “loved” his face off and worn him out (I’ve sown a new nose & mouth back on and given him new stuffing — twice). She dreads the day he’ll have to sit on a shelf someday, because he can’t take anymore.

Anyway, I would love to have another one for her so the original doesn’t get completely destroyed. I’m not sure how tall he is, but I’m guessing that from head to toe, Arfy is about 14″ tall.

THANK YOU and GOD BLESS!

If you can help Alisa find this GANZ Heritage Collection Black & White Dog, THIS SEARCH REQUEST IS NO LONGER ACTIVELY MANAGED. Please use Our FREE FACEBOOK GROUP, including POST CODE #081009-3in the subject

Now that a new Arfy has been found, you might want to read Alisa’s blog entry about the end of her search.