We have recieved the new “Bup” yesterday! Caleb looked at it kind of funny at first but after petting its nose, rubbing his fingers along the silky edge, and chewing the corner a little, he was satisfied that it was his, even if it looked quite a bit fuzzier & cleaner. Thanks to everyone who helped out. Like I said, this is a wonderful website! 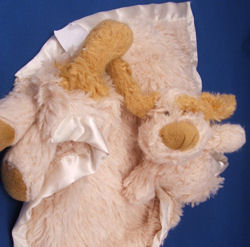 My 19 month old son has had his puppy security blanket, which he calls “Bup” since he was only a couple months old. He absolutely loves it – sleeps with it every night, and usually has it with him during the day, as well.

Unfortunately, his friend has become ragged and patched, and is looking quite sad. Bup has been dropped on one of our walks and found in the middle of the road, having been run over a few times. He was also left at a Burger King about 100 miles away and was luckily found by an employee. When I called to ask if they had found a puppy blanket, the employee said, “You mean this raggy old thing?” I knew she had found Bup!

My son likes to hide Bup in places like trash cans, the toilet, large vases, friends’ cabinets, etc, and he has recently tried to “feed” Bup chocolate pudding. After numerous washings, his fur is becoming matted, stained, and dingy.

I would very much like to find a new Bup before he will be able to fully realize the difference between the old and new one, as well as for a back-up in case Bup ends up lost for good.

If anyone knows where I can find one, or has one I can purchase, I would be very grateful.

If you can help Jane find this Large Shaggy Cream & Brown Dog Blankie with Head, Arms, Legs, and Tail, THIS SEARCH REQUEST IS NO LONGER ACTIVELY MANAGED. Please use Our FREE FACEBOOK GROUP, including POST CODE #082609-3 in the subject