Dear Rosemary,
A miracle happened today. My seven-year-old daughter found Julia’s white bear. Six months later, it was in a denim bag hanging by our front door all this time. Julia must have put it in there and forgotten. It was under other things…speaks poorly of my house cleaning! Julia (she’s four) burst into tears and hugged White Bear. She looked forward to her first night with her friend again. She hasn’t gone more than two weeks without praying for God to find White Bear or just mournfully saying how she missed him. We are all so happy!

I wanted you to know. I thought he was gone forever. Our family has had difficult times over the last two months, this was truly a gift God sent reminding us He loves us and cares about even the little things! 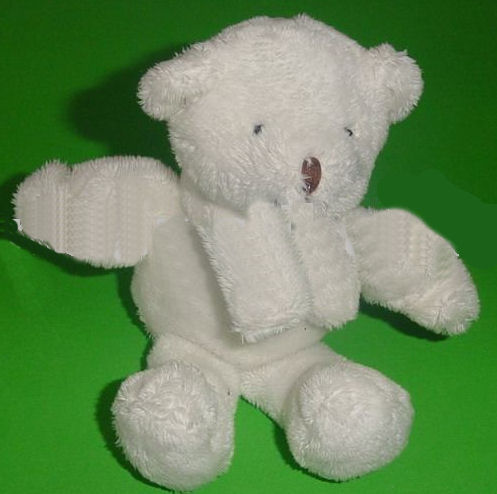 My four-year-old lost her small white bear in September. Julia still wakes up crying at night for her bear. She talks about him daily. We kept up with it for all these years, since she attached to it around 6 months of age. We don’t know where it originally came from. A family member thinks it was attached to a balloon decoration given to us at Julia’s birth. Originally, the bear had a tag with a blue hand print that said Little Touch. But this has never led me to any company or manufacturer.

Anyway, I have been looking for this bear for years, because I know it would be best to have an alternate if something happened to White Bear. I would get on-line and search “small plush white bear” pouring over pictures for hours, but it never showed up.

Just two weeks ago I sat down to search again and was astonished and thrilled to see THE BEAR in a picture on a website that sold miniature stuffed animals. The maker was in China. My hopes were dashed days later when I was able to speak with a representative of the company, and although he was polite, he said he could not help me. He said they had no more of those bears, no samples, and only the picture remained to show clients.

I asked if he could tell me the last large order sent out and perhaps I could contact them to see if any were left. I asked if they would make more and what the minimum order was and how much they were. He just kept saying he could not help me. We were on an instant message board. Anyway, I have been turning this in my mind daily trying to figure out what in the world I can do to get this bear. I had such high hopes.

I thought if I could find someone who had a business that could use these small bears as decoration (they are 10cm tall) we could find out the minimum order and if it were in reason, I would pay half of the cost, and they could keep the whole order minus just three or four bears for us. Right now the man won’t talk to me. But if someone with a business wrote, maybe he would talk to them like a potential customer.

Can you help me?

If you can help Eve find this Small White Bear with White Scarf, THIS SEARCH REQUEST IS NO LONGER ACTIVELY MANAGED. Please use Our FREE FACEBOOK GROUP, including POST CODE #111309-1 in the subject