Thanks to the suggestion of one of our Fabulous Finders, Mark has widened his search to include Animal Alley dogs. He writes:

Greetings from a rainy and cold London, it must be the start of Wimbledon tennis week! Thank you so much for helping me look for this toy dog – I feel you have helped me so much get substantially closer to finding “woof” ! I think I may have found the closest yet with eBay No. 160454738827, which is an ANIMAL ALLEY FLOPPY DOG PLUSH 24″ STUFFED ANIMAL – but he is lacking a browner nose and some very slight whiter round patches round his eyes. But he is more velour in texture, so thank you for your help! I am getting closer like a good Sherlock Holmes! 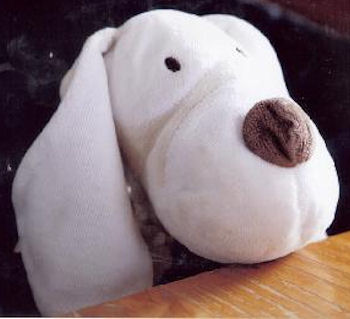 I’m looking for an off white and brown dog. He’s about 10 inches (20-25cm) long, very soft and floppy, with a large dark brown nose and two spot like brown eyes. He has a very light beige / tan body, but with white patches around his nose and eyes, and under his large floppy ears. I believe it was a Ty from the Classics range called ’Woof’, but the dogs that I have seen are all light brown with a dark nose, etc.

Scarlett’s toy puppy was with her from birth. When the ash cloud hit plane travel last year, and the family were stuck in the alps, Scarlett and “Woof” made it back from Switzerland through France and to the UK. Unfortunately, when we arrived back in London, Woof had disappeared, and poor Scarlett has been distraught about it ever since.

To this day she believes Woof is still on a train somewhere in Europe trying to get the right train home to her.

If you can help Mark find this TY Classics? Cream, White, Brown Floppy Dog, THIS SEARCH REQUEST IS NO LONGER ACTIVELY MANAGED. Please use Our FREE FACEBOOK GROUP, including the POST CODE #19207,