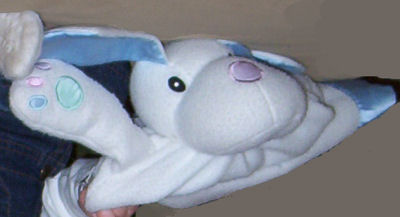 We left my son’s puppy blanket (we called it dog) in our stateroom on a recent cruise. I called within a couple hours of leaving the ship, but it was not turned in to Lost and Found.

It was given to him as a gift when he was born in 2003. He had slept with it since he was about 6 months old. I asked the person who gave it to him if she knew where she bought it, but she could not remember.

I have looked in many online shops and the closest thing I can find to the way it looked are the Dakin Lovies, but I am not sure his was that brand.

Dog was white. He had a stuffed animal head and a blanket attached. He had stuffed arms with satin paw pads. The large part of the paw pad was green and the three little parts were blue and two shades of pink. He had long floppy ears with blue satin underneath. His nose was pink satin and his blanket was trimmed in blue satin. He had black eyes and did not have a bow or anything around his neck. He was pretty long, probably 24 inches and he had a satin blue tail with a little satin blue patch around the tail. He was cotton. My son’s name was embroidered on the blanket.

I know you won’t find his without dumpster diving, but I hope you can find a duplicate.

If you can help Meissa find this Large White Dog Gown Shaped Security Blankie, THIS SEARCH REQUEST IS NO LONGER ACTIVELY MANAGED. Please use Our FREE FACEBOOK GROUP, including POST CODE #110108-3 in the subject