Thankyou, one T Rex bought and paid for, so now we have a backup on the way. I hope that I can help someone like you have helped me. I owe David a huge hug and thankyou. 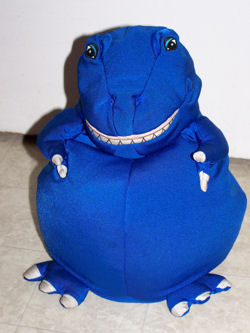 The stuffed animal I am looking for is made by Moshi, and on the tag it says T REX. He is a bright royal blue, has embroidered black eyes, and a white strip with a black outline of razor sharp teeth. His hands only have two pointy fingers with white tips, and he has three white tipped toes on his feet.

My 18 month old has gotten attached to him, almost to the point that I hate I let him ever meet him. I bought him when I was pregnant with Jackson and his twin sister Irelyn. He reminded me of a pet that I had just lost and he made me think of him. I also sleep with a pillow similar only in the fact that it has the same type of filling, and when Jackson would sleep with me he would squeeze and rub on my pillow.

So I gave him T REX, also known as Brutus, the name of my lost pet. Anyway, I never imagined that he would become so attached.

I got on eBay and found an elephant of similar shape, and it’s also a dark purple,so that he can take him to daycare and wherever else we go to save wear and tear on his Brutus, but he won’t have anything but him at night when he sleeps. It’s getting to where he shakes his head no when I try to give him the purple elephant any other time. I have to hide Brutus, and it’s getting hard to see him so upset.

So if anybody can help us I will do my best to help others.

If you can help Shannon find this MOSHI T-Rex Royal Blue Dinosaur, THIS SEARCH REQUEST IS NO LONGER ACTIVELY MANAGED. Please use Our FREE FACEBOOK GROUP, including POST CODE #121308-1 in the subject