This bear sort of looks like it. The color is about right, but the bear we lost was much smaller (probably no more than 8″ – it was intended for a baby) and didn’t have a bow. Also, the eyes and nose of the bear we lost were not black like this one, but were much lighter. I can’t remember if they were beige? light brown? It’s been a lot of years!! 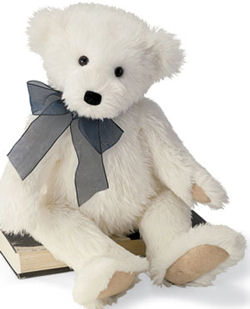 I would be interested in knowing if anyone happened to pick up a small Gund teddy bear (cream colored, that jingled when moved, and was designed to sit up with legs dangling) in the parking lot of, or inside the diner located in Newtown, CT, right off exit 10 of I-95. I think the name of the diner is the Blue Colony.

We _know_ we left the bear there, and we called the diner, but they could not find it. So I always suspected that someone would have found it and taken it.

The child who lost it is now all grown up, but wouldn’t it be a hoot to be able to return it to her!

If you can help Cindy find this 90’s Small Cream or Winter White GUND Bear, THIS SEARCH REQUEST IS NO LONGER ACTIVELY MANAGED. Please use Our FREE FACEBOOK GROUP, including POST CODE #011708-1 in the subject