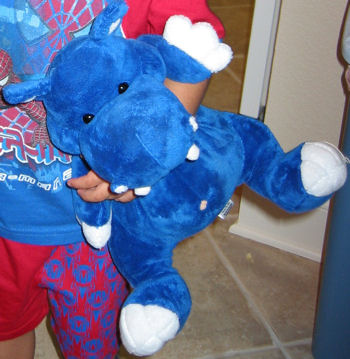 My son was already about 2 1/2 years old and had not attached himself to any stuffed animal yet, so we thought it would not happen. My dad, who likes to play on the crane machines that attempt to pick up toys, was at a Walmart with my son and, while waiting for the rest of the family to finish shopping, took my son to one of those machines and won a blue hippo. Much to our surprise, my son took to it right away, and it became his sleeping buddy. He is now 6 years old and has recently lost his ‘Blue Hippo’ — as he lovingly named it. It hurts me to see him longing for his Blue Hippo — he lost his best friend.

Blue Hippo was probably about 12-14 inches, maybe royal blue color (not baby blue) with white hands and feet and in the ears. It has a nice smooth touch (not terry). As you can see, the eyes are 2 black plastic dots. It can sit, I guess it’s firmly stuffed with long arms.

I just can’t believe we lost it!! I’m devastated! No wonder I don’t want to get a real pet! Please help,

If you can help Nora find this Sugar Loaf type Royal Blue Hippo, THIS SEARCH REQUEST IS NO LONGER ACTIVELY MANAGED. Please use Our FREE FACEBOOK GROUP, including POST CODE #012409-8 in the subject