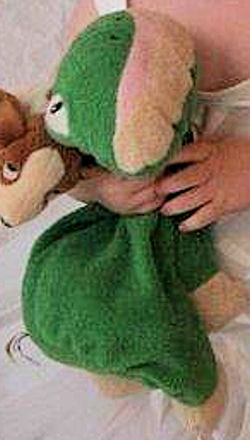 I was out shopping with my mom at Metrotown Center in Burnaby BC, in the Children’s Place, and my daughter dropped her frog, and it mysteriously “hopped” out of the store. She had already dropped it in one section of the small store, and I had given it back, so I know that’s where it was taken from.

I recently had another baby, and the transition from that was hard enough, so this was extremely hard for her.

The best way to describe this frog is that it is green all over, with white tipped hands and feet, and a big football shaped head that is soft all over. This frog is so limp from lack of stuffing, and has a white ribbon around it’s neck that she liked to loop her pointer finger through and carry it around by. I have tried imposter frogs, and she cries saying, “Where it go?” and with a quivering lip says, “No!” to any other new stuffy I try and give her.

I am so desperate to find this frog, I’ve started a facebook group, I’ve had multiple people write the company, and called many stores that have sold it.
The company is Animal Adventure, and they will not sell just one frog. They will only ship mass quantities to a company. I have phoned Metrotown, and the Children’s Place and left my number. I’m at such a loss, and just want to give her some security back with this silly frog!

If you can help Ria find this Animal Adventure Floppy Green Frog with Big Football Shaped Head, THIS SEARCH REQUEST IS NO LONGER ACTIVELY MANAGED. Please use Our FREE FACEBOOK GROUP, including POST CODE #041109-7 in the subject