We now know that the dolls are Moondreamers!

I am looking for two different sets. 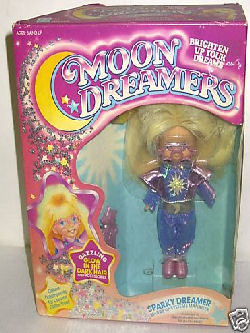 One is the Dream Castle (I think they were called) and dolls from the mid to late 80’s. I have no idea who made them. The castle was a two level plastic strange shapes house in pink and purple with an upper deck, but I think they called it a castle. It had a space theme to it. The dolls, smaller than Barbies but larger than Dawn dolls, had glitter somethings painted on each of their faces….like a glitter star eye and pink hair. They had elaborate clothes with glitter material tights and the like. 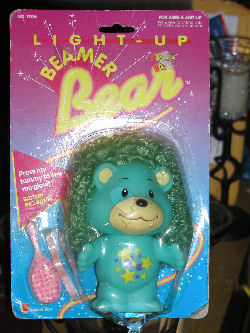 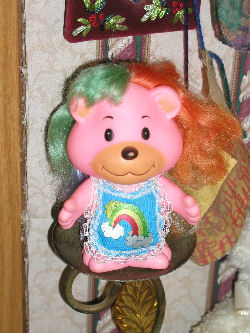 The other set I am looking for were Hair bears. They were about 8-9 inches tall, stocky nom-jointed bodies, and came in yellow, brown and pink, and their long thick comb-able hair was colored to match. I think they were tagged as vanilla, chocolate, and strawberry.

The pink haired bear had really curly hair. The brown and the blond had wavy hair. The hair was longer than the body I think. I bought them in a Kroger’s grocery store in the early 80’s.

These toys were lost in a fire in 2000, and I would love to replace them for my children.

If you can help Deb find her 80’s Dream Castle and dolls OR the Hair Bears, THIS SEARCH REQUEST IS NO LONGER ACTIVELY MANAGED. Please use Our FREE FACEBOOK GROUP, including POST CODE #111508-1 in the subject