It’s happy endings like this that make this site worth all the work!

Joanna DID have the exact kitten we were looking for and sent it to us. What an angel you two are!! Words can never express my gratitude. I will surely continue to search the site in hopes to ‘pay it forward’ to another child.

….The Brownie kitty story!..It arrived just 3 hours before we hopped in the car to head to the hotel for the night, to go to the hospital for surgery the next morning. I had opened it and set it out in the mailbox. I asked Harris to go check the mail. He opened the mailbox door, grabbed Brownie and held him up high over his head to show us and he RAN down the driveway with the biggest grin. Just about how I had imagined. He was so excited to see him again. He said “This made my day!” He could hardly stop smiling for quite awhile.

He said “he was going to snuggle with him, all the way to the hotel, then to the hospital and all the way back home.” And he did exactly that and then some for sure.

Brownie even got to be in the surgery room with Harris. He was allowed, but mom and dad weren’t, so he got to literally watch over Harris during the actual procedure. He received his own official collar too. I know how much comfort Brownie brought for Harris during that big day, and the joy that helped smother any anxiety. That was one very important day for sure. And Brownie will be snuggled and loved for a VERY long time as he continues to bring both comfort and joy to Harris. In Harris’ words….”Today would have been alot harder at the hospital without Brownie.”

Brownie was missing for TWO years. He had been through all the toughest chemo with him. I envisioned a long time of him returning in time for Harris big day…his LAST day of chemo ever, and his surgery to have his port-a-cath removed. I am certain that God orchestrated Brownie’s return just in time for Harris’ big day. What a blessing.

Thank-you from all of our hearts!!!! 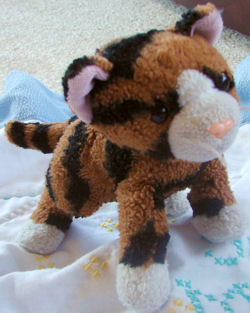 Hello! I need help desparately. I have spent untold hours searching online and in stores, and have had friends also looking for a lost lovey of my son’s. It has been missing for 2 years, and he still misses it.

I do not know the manufacturer. I think it MAY have been purchased at Target around 2004-2005.

It is maybe about 5-6 inches long, dark brown with black stripes, and white on its face, ears, and paws.

It is extra special to my son, as it was his special kitty to take with to the many doctor appointments during his chemotherapy treatment for leukemia. He is due to finish up that therapy soon. And with ‘Brownie’ having been through the toughest part of the chemo with him, I would love for him to ‘return’ for the end of it. It would be an absolute DELIGHT for my son. I know he would be so thankful and excited to see him again.

Please help me find this special kitten for my son. He has been through so much fighting cancer and deserves to have his “Brownie” back.

Thank-you for all you do!

If you can help Angie find this Small Brown Cat with Black Stripes & White on his Face, Ears, & Paws, THIS SEARCH REQUEST IS NO LONGER ACTIVELY MANAGED. Please use Our FREE FACEBOOK GROUP, including POST CODE #062809-3 in the subject