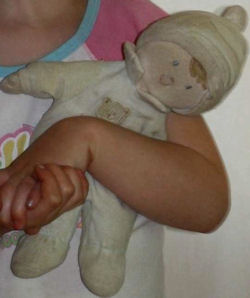 I am looking for a replacement baby for my daughter, who is heartbroken after it was left on a plane. It is a RUSS doll named Timmi, with a teddy on the front, and it is sea green. We found it in a catalog from 2002. I have an item number from the old catalog, but it has been discontinued for awhile. If the doll is 10 inches big the item number is 26840, and if it is 14 inches long the item number is 26841. Hope this helps.

She has had it since she was a baby, and of course like many of us, became attached to it and used it for comfort. It has been squeezed during many thunder storms, has watched many Christmas presents being opened, and has been fed several pieces of birthday cake over the years.

Last week on a turbulent flight from London Gatwick to Toronto, it came out of my daughter’s carry on, and was lost in the rush to get off the plane.

I would like the original, but believe the Thomas Cook Airline will not have any luck in returning it. So a replacement would be better than nothing.

If you can help Doug find this 2002 RUSS Brunette Doll Wearing Pastel Green Sleeper with Bear on Chest & Cap, THIS SEARCH REQUEST IS NO LONGER ACTIVELY MANAGED. Please use Our FREE FACEBOOK GROUP, including the POST CODE #16107,