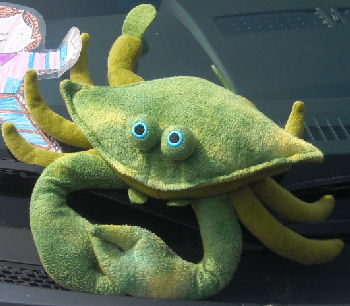 I’m looking for a Coinstar green and yellow plush crab with googly eyes with bright blue on them. It is probably about 10 inches long, and I am assuming it was made in 2009 or 2010.

My parents gave it to me last year after I had emergency surgery, and I gave it to him while I was in the hospital, because he missed me. He named him Patty Pal.

Yesterday was Patty Pal’s birthday (according to my son), and I got everything ready to throw him a party, and that is when we realized he was gone. We searched the cars and this whole house. I called everywhere we went that day, and he was nowhere to be found. He was so upset and cried several times.

This is the first time I have seen him attached to anything, so I am hoping to be able to find a new one.

Thank you for your time. I learned of your services from a mother who just lost her son to cancer. You guys were able to find his favorite teddy bear, and he was holding this when he passed away last week. I love what you all do.

If you can help Kimberly find this 2009? Coinstar Green & Yellow Plush Crab, THIS SEARCH REQUEST IS NO LONGER ACTIVELY MANAGED. Please use Our FREE FACEBOOK GROUP, including the POST CODE #18236,