THE POODLE IN THE PHOTO IS NOT THE CORRECT Color combination.

This poodle, with the pink ribbon in its hair, is identical to the one I had, except that mine had a black nose and a blue ribbon instead of a light pink nose and dark pink ribbon. I found this one on eBay, and it is in amazing condition considering its age.

These stuffed animals were well made structurally, but their fur wasn’t well crafted. As the stuffed animal aged (quickly), the fur fell out. Considering this, I doubt that many Eden poodles like the one I had are around. Most probably were thrown out decades ago, which is a shame since the pattern to make new ones with better fur could be derived from the original. 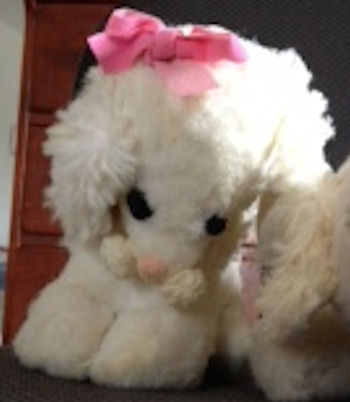 Sometime between 1969-1972, a manufacturer (not sure which one) released a white poodle stuffed animal that was named Bon Bon. It was seated, maybe 6 to 8 inches tall. It was embedded with a music box that, when wound, played Frere Jacques, and the poodle rotated its head slowly.

I had pasted on a new nose since it had lost all of its pom-poms except for its original eyes while I was still small, and I had sewn on (when I was about 10) some white acrylic fur scraps to cover the gray ruff and head because my mother was threatening to throw out the dog, which she said was “a mess.”

I had the dog until I went away to college, when my father cleared out my room because he wanted to make a second office for himself. I’d love to find one, not to reproduce the pattern, but just to have something I once loved so much all over again.

If you can help Sabra find this 70’s Small White Seated Windup Poodle – Frere Jacques Head Moves, THIS SEARCH REQUEST IS NO LONGER ACTIVELY MANAGED. Please use Our FREE FACEBOOK GROUP, including the POST CODE #20848