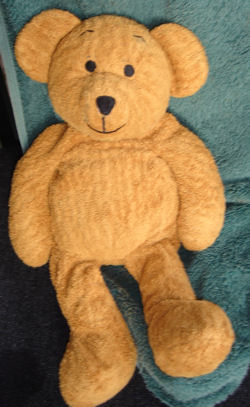 I’m looking for a Mothercare tan bear that is about 12 inches or 30 centimeters long from head to foot. The tag number was CIF A81108110, and it was made in Vietnam. It was available in Mothercare around 2002.

I purchased this teddy bear from Mothercare in 2003 when my son was born.

We named this bear Ted! He was loved and adored by my son Kris. Ted went through a lot with Kris, as he was born with a congenital heart condition called Fallot’s Tetralogy. Ted went to every hospital appointment with Kris, always staying overnight in the hospital with him and even had a 7 hour operation with him to fix his heart!!!! Ted spent 7 weeks in intensive care keeping Kris company. They truly were inseparable.

Unfortunately, 5 years ago Ted became lost in a house move!! Kris was devastated….I tried different bears, but it just wasn’t the same….over the last few years I have searched for Ted, but never had any luck. Kris had to go through his hospital checkups without Ted.

At a recent appointment, the consultant has told us that Kris will be needing another operation on his heart in the near future. Kris instantly wanted Ted. He became upset at the thought of not having him by his side. At the age of 11 he still misses him dearly. He would love to be able to take Ted with him once again while the amazing doctors fix his heart for the second time.

I would love to be able to reunite my son with Ted! I want to see the smile on his face when he knows that Ted will be going on the journey with him through more surgery….it’s the only thing he has ever really wanted back, and I know he misses him dearly.

The doctors have given him a maximum of 2 years to his operation, but that also depends on how fast Kris deteriorates 🙁 I just hope I can find Ted in time 🙂

Claire
If you can help Claire find this 2002 Mothercare Tan Bear, THIS SEARCH REQUEST IS NO LONGER ACTIVELY MANAGED. Please use Our FREE FACEBOOK GROUP, including the POST CODE #30760