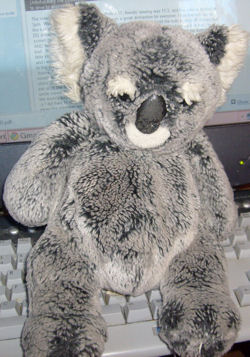 I’m looking for a koala bear, about 10-12″ tall, with a leather nose (in the pic, you can see it had already gotten chewed on till it opened and I had to repair it already). He’s got grey fur all over, white fur inside the ears, black eyes, white mouth and eyebrows.

His tag was already so bad that I couldn’t tell what his brand was anymore, but of course, until then, for a good 4yrs, I’d been trying to just find one at the same store I bought him at.

My son has had this wonderful toy and loved it as none other since he was 1 year old. Unfortunately, all that love caused the poor thing to become quite worn and need washing.

Well, that was all well and good until I washed it, and it ripped open in the back.

I stitched it closed and took a picture of it, knowing I better start looking for a second one… and that it would not be easy, because the store where I’d purchased the bear in our mall hadn’t had another one since then… and the other KB stores didn’t either.

I have never found another one of these, and now KB Toys is out of business.

On top of that, my 7yr old son is as attached to it as ever, refusing to go to sleep without it.

It is his one and only… no other stuffed animal has ever gotten the privilege of joining him in bed. Over the years before and after that incident, it has gone missing, and we’ve been lucky to find it more than 10 times.

Well, my son left it outside the other day… as he felt that his bear wanted to climb the tree in the front of our house… and forgot it. When he went outside today, only remnants of it were left… little chunks…. from where squirrels, cats, or who knows what (a mean teenager?) ripped it apart.

My son is horrified… he’s been sleeping in my bed since… because he will not use another stuffed animal… can’t even find a different koala anywhere that pleases him… and he’s afraid to sleep without his protector.

If you can find him, please let me know, and I will happily pay for this treasured family member.

If you can help Katherine find this KB TOYS Koala Bear, THIS SEARCH REQUEST IS NO LONGER ACTIVELY MANAGED. Please use Our FREE FACEBOOK GROUP, including POST CODE #030209-5 in the subject