Hello. Update on the blue carter’s musical crib toy. We received him in the mail yesterday. Thank you so much for all of your help. My little girl is so happy she got her friend back. She believes he found his way back to the factory and was fixed up good as new:) thanks again!
Tara 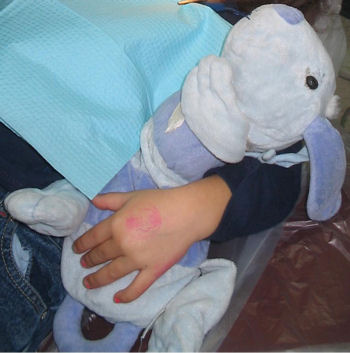 I bought my daughter a musical plush dog toy at Target in 2003. she recently lost it at an airport. It was light blue and dark blue down the body, with a small patch of hair on top of the head with a loop to tie on a crib. It had two small arms, and the body was a pull down musical thing that played a song, and the cheeks lit up red (once upon a time).

His face was similar to a the Carter’s dog plush, but I’m uncertain if it is made by Carter’s. We always called it a dog, but some people said it looked like a rabbit, so maybe it was listed as that.

If anyone can find one it would be greatly appreciated.

If you can help Tara find this Carter’s? Light and Dark Blue Dog Crib Pull, THIS SEARCH REQUEST IS NO LONGER ACTIVELY MANAGED. Please use Our FREE FACEBOOK GROUP, including POST CODE #050409-1in the subject