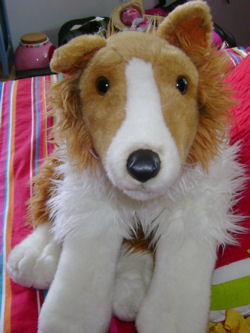 My Mom put it in a charity bin at a Walmart in Plainfield, Illinois, between the last days of May or June 1-9. Outside of Walmart there is a box in the parking lot where you put unwanted items, and a truck picks them up in the middle of the night and takes them to a charity. I have contacted Walmart and they haven’t replied at all, so I at least would like to try and find what charity it is and put the clues together little by little.

Description- he looks dirty and raggy. The first time we washed him he was also dried, and he got curly hair, plush, Animal Alley brand, tag was cut off from his butt, had a stitch on the upper part of one of his two back legs and another on his belly, dull brown, was one of the first Animal Alley dogs which means he is bigger than the ones now about or over 24 inches in length, was a collie, got him at Toys ‘R Us, had like a tiny indent of smaller fur by his long nose, he had some white on his face, chest and back, but it was a dirty white or looked worn out, 10 year old stuffed animal, knots in his hair, had some black on his ears that looked worn out, a blackish leather nose that was still smooth but a little crumpled on the tips of two sides, had black threaded lines on his paws, used black thread to stitch up the part on his leg, white at the tip of his tail.

That’s as much information I can give. Please help me find him or one like him.

If you can help Amber find this Large Animal Alley Brown & White Collie Dog, THIS SEARCH REQUEST IS NO LONGER ACTIVELY MANAGED. Please use Our FREE FACEBOOK GROUP, including POST CODE #072509-2 in the subject